Talked to Dr C about the results from the assessment, and I took it again with her. I scored a 44 this time… we looked up the scoring; doesn’t look like you can score much higher than a 50… I’m not DID though, so…? I dunno.

I had questioned how reliable my self-report could be if my score changed so much in just a day. I questioned if maybe I was exaggerating things on the questionnaire. She said that it sounded more like I was trying to downplay my experiences (I was talking to her about a few of the questions).  I have trouble quantifying my experiences, so I’m not sure I answer the same way each time. She said that the test was statistically quite accurate and reliable. She also mentioned that one of the underpinnings of dissociation is not being able to remember the act of dissociating. So, I guess that’s another check in the “you’re really fucked up chicky-do” column…

She asked if I was worried about a DID diagnosis. I reflexively answered “no” because I don’t see it as that bad & because I’ve seen DDNOS on my records, so others don’t think it’s that bad. I think I’ve talked to her another time about it also, and I think I remember ruling out DID, so there’s that… but on the way home, I kinda panicked about whether her thoughts on it were evolving to lean more towards that diagnosis. I just text her asking if she was seeing DID. I’m not sure she will answer that through text or not, but as long as we address it at some point, I think I’ll feel better about it.

I know my dissociation can be severe at times because I’ve completely lost days, weeks, and even months in the last decade. I guess I just don’t think it’s that severe all the time. I don’t see too much evidence pointing to DID other than L’s frustration around never knowing what to expect from me in terms of likes and dislikes…

We chatted more about dissociation and the functions of it. We talked about other coping skills for handling the body sensations and the flashbacks. I think she kinda came to the conclusion that even my healthier coping skills utilize dissociation to a degree. We talked about the writing and the art, and how I often don’t really remember what was created. We did differentiate the “flow” of creating vs more dissociative aspects of it. I think with both the art and the writing, part of the creative process is having no real direction and letting the piece take over its own evolution. It’s when I can’t recall writing something (like a blog entry) or creating something, that the dissociation plays a bigger role in that coping strategy… there are definitely some things I have to look at over and over again because they seem familiar, but I don’t connect to having made them.

Dr C commented that dissociation, especially such intense dissociation, takes a lot of energy. I countered that it’s actually the least draining of my coping skills, but now that I think about it, I wonder if that contributes to the constant exhaustion. I know some of it is the depression, but maybe she’s right; maybe the dissociation is exhausting as well.

your daily moment of zen

Well, after looking forward really badly to seeing De today, my defenses were up and we talked about a whole lot of nothing.  I told her how I had basically just shut down after my disclosure to her back before the holidays.  She tried to get me thinking, but my brain was like a little kid not wanting to leave the beach – he dug his heels in and refused to budge.  Pictures of planning for my “new to me” fish tank came flying through my brain.  I told her, so we talked more about the fear of re-hashing things.  She emphasized again that the worst is behind me.  Still, all I could picture between visions of planting ideas for the tank was this scrawny little boy with huge dark circles under his eyes, digging his heels into the wet sand, and screaming in protest.  (I think that will end up being an art project).  Every time I saw him, fear coursed through me and “his” thinking of not wanting to go back to that abuse flashed through my head.  I told her about the idea of a kid digging their heels in and not wanting to go (in my head, I was pulling his arm and shoving him forward).  De reminded me to try walking him gently along the sand, staying on the wetter sand so our feet don’t burn.  I still wanted to shove him forward, and no amount of rationalizing that it would probably make him feel safer if I was more gentle worked to change the picture in my brain.  Maybe next week I’ll have worked up to coaxing him along instead of forcing him.  De seems to be ok just doing the “process” piece of things (talking about the feelings and the concept of talking or thinking about things).  She said we can work towards more content down the line.  This week, she wants me to try to talk to L about the fears and what talking about all this stuff to De would be like.  She doesn’t want me to worry about the details of things, but the emotions behind it (sometimes that can be scarier but I guess she is hoping L is a safe-enough person for me to start opening up to).  She also wants me to work up to maybe telling her (or expressing in some way) the stuff I had on my list to talk about but that I tabled for the time being.  She thinks it may be a good place to start.  I’m not sure how well I will be able to talk about it, it’s not something I really like to bring up because it tends to be a taboo topic in most cultures.  I guess I will give it a try throughout the week and see what comes of it. 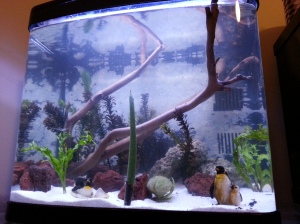 Anyway, after leaving De, I dragged L out to the pet store to get some plants for the above-mentioned tank.  I found 2 that I liked and was able to purchase.  I’m still looking for moss with which to cover the back wall, but these will do for now.  I’m not sure what the bottle-brush looking thing is, but I know the one with the broader leaves is a java fern.  I also have a waterlily bulb in there, and a red mangrove seed.  The waterlily bulb is from the canal out back, and the red mangrove seed is from the beach.  I split the bunch of the mystery plant into individual stalks, and I separated the 2 java ferns.  I hope they take root well and grow in nicely.  I’m hoping to get some christmas tree moss for the driftwood, and some other type of blanketing moss for the back wall.  I’m also thinking of making a “river” out of the blue gravel from Mighty Mouse’s (the betta) old tank.  I’m just not sure how well it will stay in place when I vacuum. (since originally writing this, I was reminded that java fern needs to have the rhizome in the light, so one is now tied to the front branch of the driftwood, and one is tied to a lava rock).

There’s a single betta and 10 ghost shrimp (oh, and the tiny snail that hitched a ride on the bottle-brush looking plant)

my voice escapes me

There are times when what’s inside is just not able to be formed into sounds… I can type them, but I can’t speak them… It’s funny, because written words are so much more permanent, but the courage to say it is not there.  Writing is more impersonal, more detached… it’s easier… and I’m so much better at it in times like these than I am at giving voice to the thoughts.  It requires less effort. Less commitment to connect with another because I don’t have to hear your voice when you see what it is I am saying.  I don’t have to see your face… I can hide and do it anonymously… I suppose I could do that over the phone also, but then you may not hear what I am not saying… and I am reminded again why I should just melt into the fibers of the carpet…

It’s not happening… the sense of relief that washed over me earlier has given way once again to that dark cloud that seems to permeate everything.  I am alone because I chose to be this way.  I build up the walls not only for myself, but against others seeing in.  I really miss my old therapist.  I miss that I could call her and be squeezed in that week as early as she had available, or she would talk to me over the phone.  I miss that I trusted her… while I am not running from D, I don’t yet trust him… and that makes me feel so alone in this.  I don’t want to burden other people with the weight of my thoughts.  I choose not to let my family in because they have their own shit, and they don’t need to hear what is in my head.

The weight bears down on me almost too much at times, and I just wish it would finally squish me out of existence… but that won’t happen… and even if it did, it would be incredibly selfish of me (as I am so often reminded) .  I wouldn’t want to do that to anyone else… they don’t deserve it… but the peace on my end would be nice…

Writing is a struggle against silence. ~Carlos Fuentes

I struggle to find my voice. I often find it in my writing… It lets me say the things my tongue can’t wrap itself around… and it helps keep some horrors unspoken yet recognized.