Anxiety and stress in my body

I’ve had an “off” cardiac history for most of the time I can remember. I’ve seen cardiologists, worn monitors for varying times, but nothing ever gets recorded or noticed as problematic when they are actuality searching for things.

When I was hospitalized, tech’s were constantly either retaking my vitals, or sending a nurse in to check it.

My average resting heart rate runs about 95bpm (i believe the “normal” for women my age is somewhere significantly lower than that).

No one’s been able to give me a solid reason, though the more research i do into ptsd and trauma, the more i realize it’s likely that.

Anyway, this week’s average had been in the 120’s. My doctor noted it when i went in for having sent my back into spasms on Sunday, but quickly dismissed it a a result of the coffee i was finishing… i should have mentioned to her the “poprocks” in my chest several times this past week, but I’m no good at bringing up something other than what she’s focused on in the moment… it kinda feels like someone lit a sparkler or trick candle inside my chest. It lasts for a few minutes, then fades. It comes more frequently as my stress levels go up. It’s not bad though, since it normally feels like a flopping fish…

Anyway, no doctor is really sure what to do with it all. I’m finally figuring out it is highly correlated with my stress and anxiety levels. This week, not only was i pretty triggered, but i injured my back, and i was fighting off something that drained all my energy (though that energy drain seems to correlate much higher with my tachycardia, just not sure if one causes the other, or both are responses to something else)… it’s not really surprising my pulse has been really high all week (if it ever sustains at about 250bpm for more than a few minutes, I’ll take something).

Today’s therapy was highly emotionally taxing, as were the earlier flashbacks…

(I clearly had something else in mind to write, but i was interrupted, and now have long forgotten what it would be).

Dr C managed to piece together for me that today’s flashbacks were probably related to a duckboy anniversary i never really paid attention to: he stalked me at my college freshman year right around thanksgiving… i knew it was an event in our relationship, but i never really thought that it would cause ripples so far forward.  she hypothesized that, since it was finally the last interaction with him, it stuck with me.

I was laying in bed, trying to avoid waking up, when a memory of duckboy hit me out of nowhere.

It was all condensed into about a minute or less, but my body is still tingling. There are still echos of the memory…

He used to insist it wasn’t sexual because we had our clothes on. I only resisted so many times before giving in. It was always easier to get it over with than to try to squirm away from under his almost 300lb frame…

For the longest time (we’re talking almost 20 years), I was adamant on only calling it “very insistent”. Whomever was hearing it tried to rephrase it as assault, and I would correct them. I refused to put that label on what he did (partially for his sake, partially for mine)… I had flashbacks at the time, but I wouldn’t remember them after they passed (or even understand that I had one). It wasn’t until my long bout of hospitalizations, where medical records contained notes of me crying and trying to explain the memories, that I finally realized something more than just the memories of my parents fighting was bothering me… Dr C was the first person who heard me admit that what duckboy did might have been rape. I was still terrified to tell her any details, but at the same time, I started desperately trying to write down what I remembered in the flashbacks while they were happening. I knew if I didn’t write in the moment, I’d forget it again as soon as it faded.

The first time I wrote it out, I was journaling on my phone. It was the early days of smartphones though, before apps saved what you were doing should you be interrupted. A call buzzed in and erased everything I had tried to write down… I took that as a sign that no one needed to know the details. I also switched to trying to capture it on paper. I was anxious someone would find it, read it, and know the things I had done, but i really wanted to be able to read whatever it was I kept remembering and forgetting… It was maybe a year later before I tried to bring up the content of my flashbacks again in treatment.

I was hoping writing about the flashback this morning would help it fade faster (it sometimes works that way), but I’m still feeling echos of memories. I guess my body wants to make me listen. Stuff had been stirring all week, but none of it had been this explicit; there were no real defined cognitive memories, just body sensations. Now, even the echos have snippets of whole memories attached to them… I guess its good group was cancelled and I was able to get individual instead. I don’t want to have to keep sitting with this all weekend.

Authenticity of expression is something I struggle with often. I’m constantly worried about what people may think, and the consequences of their opinions.

This is especially true of my art. While it’s often the most authentic expression of self I’m able to reveal, I worry a lot that people will change their opinion of me based on what they see. I worry they will hate me, and deem me less worthy than even I deem myself. Sometimes I’m able to get past that in my art journals, but lately, even that has been censored.

I feel stuck around being unable to express what needs to be expressed in any authentic manner. I find myself replacing the reality of what I want to create, with a “rainbows & butterflies” edit. I’m stumbling in therapy and focusing on the same, safe methods of expression; the ugly, scary stuff is replaced with a unicorn sticker…

There’s so much “icky” stuff floating around in my head, but I go silent when it comes time to talk about it. There’s a buffer between my brain and my mouth, and my brain and my hands. Things leave my brain one way, but get “prettied up” before they have a chance to be expressed. 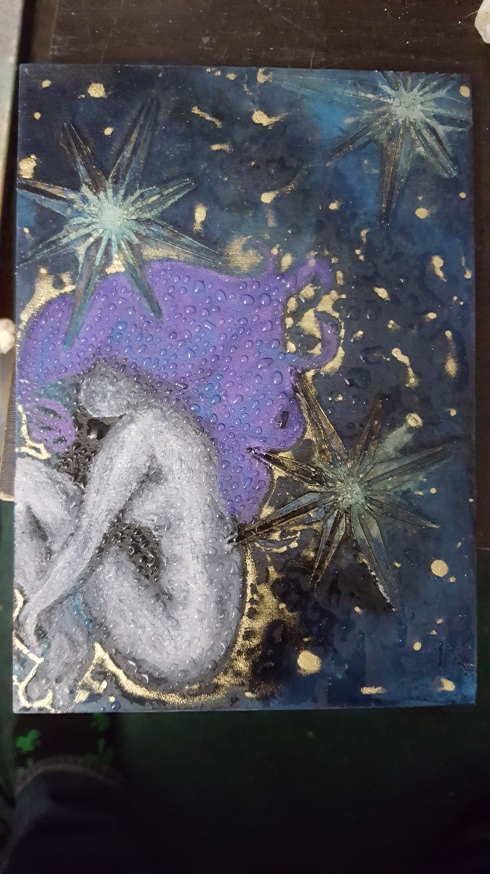 This piece wasn’t supposed to look so peaceful and serene… it was supposed to represent the struggles around trauma. It was supposed to express the loneliness and alone-ness of experiencing flashbacks and memories no one else knows are even there. It was supposed to be more graphic… but in the last minute, I froze, and changed the “gore” to “pretty” and ” socially acceptable”…

Lately, no matter what I do, no matter my intentions at the start, everything gets censored for the comfort of everyone else. That all just leaves me feeling more alone and distant than before I started.

I want to be able to convey what it feels like to constantly remember the physical sensations of things long past. I want to express the hopelessness and fear and loneliness and frustration and betrayal… but I end up stuffing it down and covering it up.